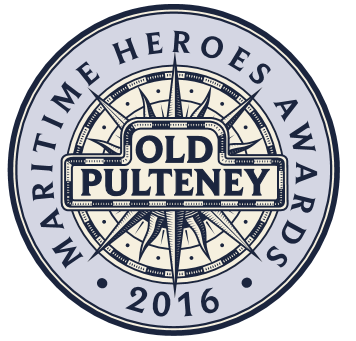 In what has been another tough year of competition, the finalists of this year’s annual ‘Old Pulteney Maritime Heroes Awards’ have at last been unveiled. From 30 semi-finalists from all over the UK, three exceptional entrants with extraordinary stories to tell have been voted into the top three spots: David Clarke from Darlington, Laura Cammidge from Glasgow and Matthew Reed from Kingswear in Devon.

The annual awards are now in their fifth year, having been founded by Old Pulteney Single Malt Scotch Whisky – known as ‘The Maritime Malt’ – to reward the outstanding passion, commitment and achievements demonstrated within Britain’s maritime communities, at both a local and national level. UK sailing clubs were invited to nominate any members they felt deserved recognition within one of the following three categories: Club Service, Bravery and Sailing Achievement.

David (55) was nominated within the Club Service category for his role as Centre Principal & Director at Ullswater Yacht Club, and for the outstanding level of commitment he has given to the Club since his youth. In 2013, David used his strong passion for sailing to instigate and lead a team which developed and delivered a sailing school facility within the Club. Since its inception, the sailing school has trained over 1,200 individuals from local school, scouts and community organisations through the RYA scheme, providing a tailored sailing experience from qualified instructors to schools and groups.

Nominated within the Sailing Achievements category, Laura (26) has demonstrated outstanding sailing success despite being partially sighted.  After learning to sail at the Clyde Cruising Club Dinghy Section, Laura has since spread her wings and proceeded to win silver in the ISAF Blind Sailing Fleet Worlds 2015 and International Championships 2015. In September, Laura made her debut at the World Blind Match Racing Championships in America where her team won silver.

Matthew (72) was nominated by Royal Dart Yacht Club in the Bravery category for saving the life of a sailor during the Dart Sailability Regatta. Matthew, who was off duty and attending the race as a spectator, dived into the water to rescue a trapped disabled entrant whose etap had overturned. Although the entrant nearly drowned, Matthew managed to unstrap him and get him to safety.

Old Pulteney has presented each finalist with a trophy and bottle of the award-winning Old Pulteney 17 Year Old Single Malt. The three shortlisted sailing stars will now go through to the final stage of the competition and the successful candidate will win £1,000, a commemorative trophy, and a bottle of Old Pulteney 21 Year Old, which was voted ‘World Whisky of the Year’ in 2012.

Margaret Mary Clarke, Old Pulteney Senior Brand Manager commented: ‘The standard of entries this year has been exceptional, making the task of picking our finalists tougher than ever. It has been an absolute privilege for the Old Pulteney team to hear so many inspiring stories from around the UK and our congratulations go to David, Laura and Matthew for reaching our top three. They are truly deserving of this recognition and we wish them the very best of luck for the awards’ final stage.’